How to Make Manicures Easier? 👇

Hello dear. Hope you have a nice mood today~💕

For the nail artists, it is easier to do care for their nails. I believe most people just like me, simply cut out the extra nails to finish nail care each time. How do we fix our nails to make our nails healthier and more beautiful?
Today I am well prepared some nail tutorials and nail tools, hope it is helpful for you. After seeing this post, do not just make your manicures into a mess next time.

Do you know which nail tools need to be used for repairing nails? 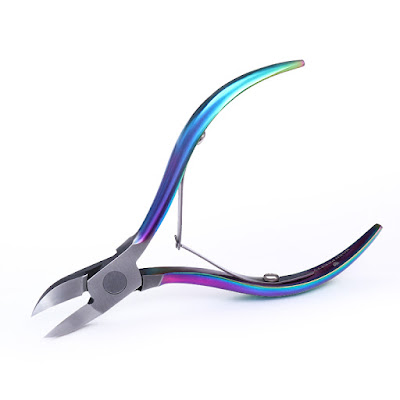 Instructions: After washing your hands, cut out the required length, be gentle to cut into the corner of the nail, until embedded in the meat cut, and then gently pick then you could clean up the corner barbed. And then repair the edge, cut into mixed circles. It is a very great choice for toenails with the bent nose pliers. 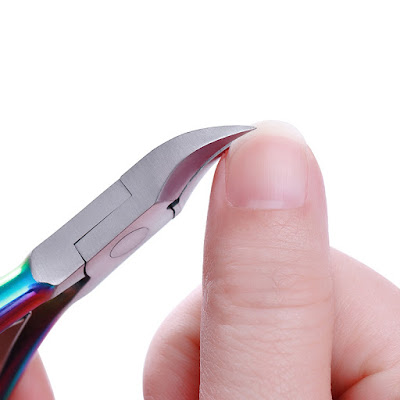 Tips: The nails can not be cut too deep, otherwise the nail bed will become shorter and shorter to affect the appearance of nails, especially women. It could be used for cut nails, false nails, 3D decorations and so on. 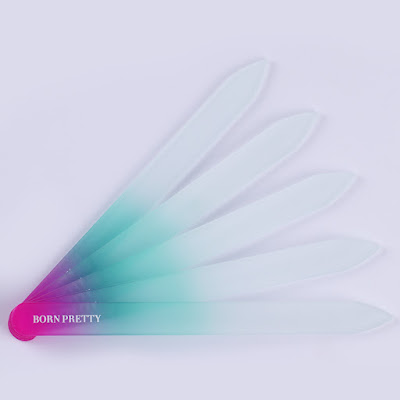 Instruction: Grind your nails with glass file and follow the order of filing the two sides then the front side to grind it into ideal nail shape after determining the length of the nails. ( There will be detailed steps about how to make several nail shapes at the end of the post ) 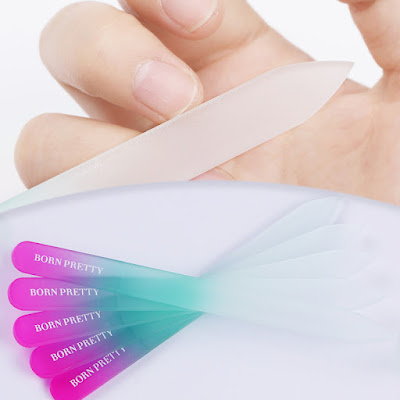 Tips: When using a nail file to grind the nail shape, the two sides of the nails should be finely and the front end must be rounded. 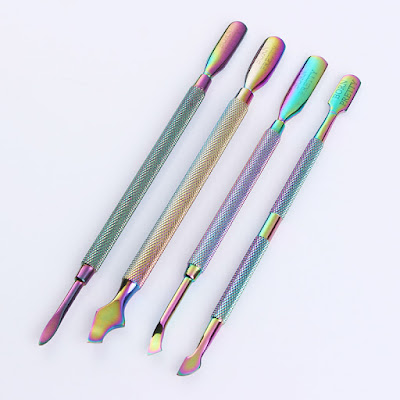 Instruction: Push the aging skin to the palm of the hand to make the nail cap look slender, then scrape the cutin withe the other end of the pusher. 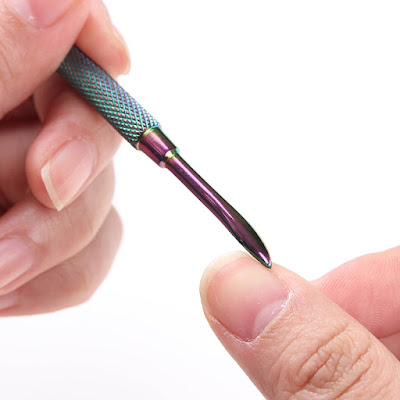 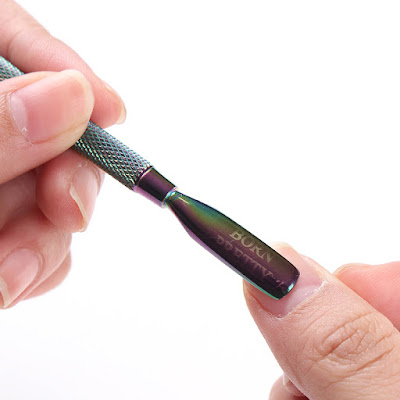 Tips: Moderate force should be used to push the dead skin, not too much force, so as not to damage the methyl, otherwise it will affect the growth of nails. 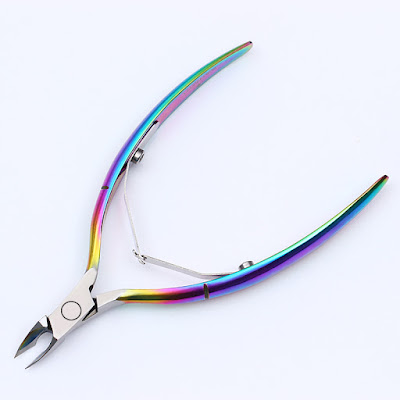 Instruction: Cut off the dead skin and thorn with the cuticle scissors to make the fingers looks beautiful and tidy. 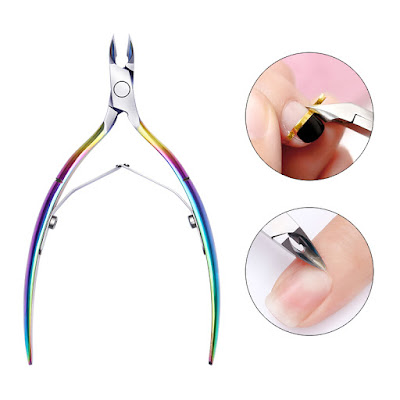 Tips: Do not pull when using the cuticle scissors, and just cut it directly, so as not to damage the finger skin, and can not be cut too deep. 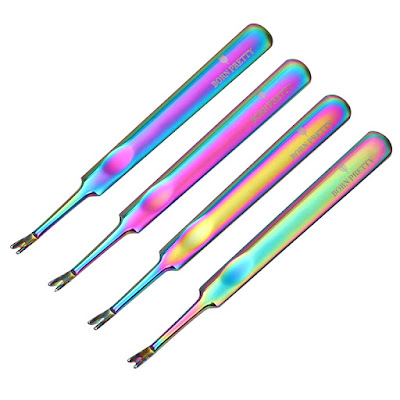 The dead fork is used for the dead skin of the two-side nails and trim the nails in the direction of the nails. 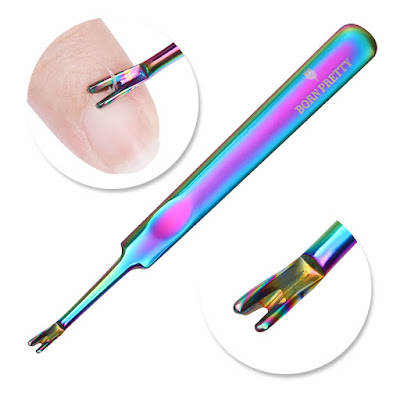 Tips: Don’t cut it forth and back to avoid hurting the nails. 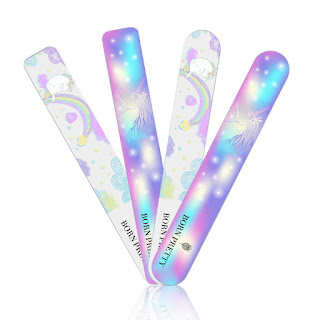 The nano file can throw off the cutin of the nail surface to make the nails surface thinner and brighter, then nails will look crystal shining. 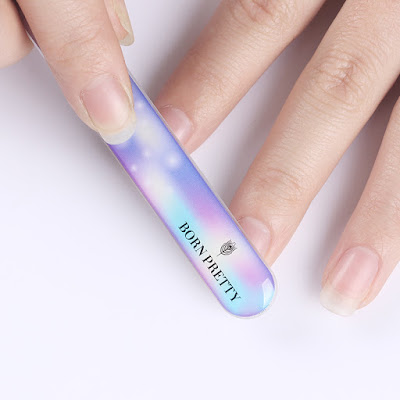 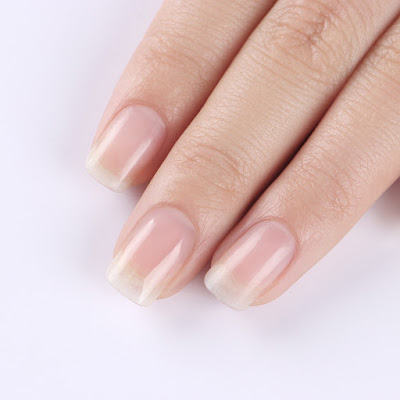 Tips: Don’t polish your nails with the side of thickest surface, otherwise the nails will become thinner; Do not rub your nails back and forth when polishing because the heat generated by friction could make you feel uncomfortable.

The bacteria carried with nails will be attached to the tools, do not forget to disinfect the tools after trim your own nails at home. 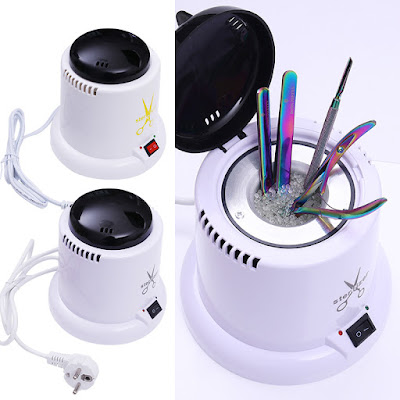 How to trim the nails into the ideal shapes? 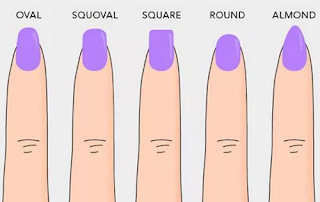 🔺Oval
Oval-shape nails are favored for women with its elegance, which is suitable for wide and narrow nail bed, the grown nail bed could create a beautiful fingertips.
How to?
1. Grind the nails from the two sides to the middle part horizontally until both sides are symmetrical;
2. continue to polish the nails from the edge to the center until to make the outer edge nails into oval.

🔺Squoval
The squoval nails has the elegance of oval and capable of oval nails, and the square nails can be counted as the most popular nail shape. This nails shape is suitable for most people, which can be described as the ideal shape of nails.
How to?
1. Firstly, polish the nails into square shape. The specific operation is polishing the nails from the two sides to the middle part and grind the both sides into ninety degrees at right angles;
2. Round the right and left sides until the nail outer edges appear oval nails. The feather of square circular nails is still visible on both sides of the straight line, not to polish the corner too round.

🔺Square
Square nails are the basic form of classic French manicure. This shape of nails on both sides is straight line with sharp corners. Square nails are suitable for a longer nails, larger nail bed, which can narrow nails visually to make the fingers seem more slender.
How to?
1. Grind the nails from the two sides to the middle part horizontally, grind the both sides into ninety degrees at right angles;
2. Grind the nails to the desired length and shape, incline the nail file and grind it slightly obliquely to the right and left corners.

🔺Round
Round nails are short and cute, which are suitable for those who want to stay short nails, or do not want too bother modeling. This shape of nails is a great choice for the wider nails to make  nail beds look narrow, then narrow the nails in the visual.
How to?
1. Grind the nails from the two sides to the middle part horizontally, until both sides are symmetrical;
2. Grind the edge of the corner to the site into a clear arc.

🔺Almond
Avant-garde almond-shaped nails are best suited to match with crystal or art nails, and very popular in central Europe and Asia. Super stars also love to try sharp gorgeous fingertips. But almond-shaped nails are not suitable for everyone to try, it will definitely make the nails become more slender, so if the natural nails shape is too large or too small, or finger thicker people are not suitable for this nails shape.
How to?
1. Carefully polish the nails on both sides to make them show symmetrical on both sides and get more and more fine shape;
2. Grind the nails to cone shape from two sides to the middle part until you get satisfactory results.

How to decide your own suitable nail shape? Nail trimming needs to fit the thickness and length of the finger and nail bed shape. If your bed is generous, then square shape will be more suitable;  cad sharp square nails could be considered for narrow nail bed, not only slender fingers and increase the sense of strength; great choice to try circular nails if you do not stay long nails with less trouble.
Another way to determine the shape of a nail is by reference to the shape of the half-moon on the nail. In general, the larger crescent moon can consider oval or round nails; smaller arc crescent moon can consider square or squoval nails.